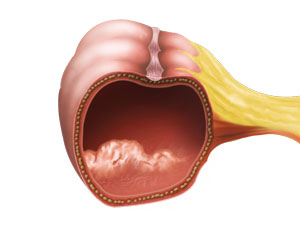 What is Colorectal Cancer?

Who is at Risk of Colorectal Cancer?

Although colon cancer affects people of all ages, it is common in people aged 60 years and above. Certain factors that increase the risk of developing colon cancer include alcohol, smoking, high fat intake, family history of colon cancer, presence of polyps, and increased age (>60 years).

In the early stages, people with bowel cancer may not experience pain. However, the following symptoms may indicate colon cancer:

Colon cancer is diagnosed by symptoms, medical history, and other diagnostic procedures which include:

If the colon cancer is confirmed by biopsy, staging is performed to detect the size, location, and stage of the cancer. Staging is performed using computed tomography (CT) scan of the abdomen, chest & pelvis, magnetic resonance imaging (MRI) scans of the pelvis for rectal cancers.

Faecal occult blood test (FOBT) - is a test which determines small amounts of blood in the faeces which the naked eye cannot see. It is a screening tool.

A positive does not mean you have bowel cancer.

Next step would be a colonoscopy to detect the cause of blood in the stools.

What is the Management?

Most patients will have surgery to remove the involved segment of the colon and rectum.

Surgery is performed open or key-hole, Key hole can be laparoscopic or robotic.

For right and left sided colon cancers after removing the cancer segment, the bowel ends are joined together. Generally they do not need a stoma ( bag)

And in low rectal cancers the bowel ends are joined together and a stoma ( bag) is formed, which will get reversed down the track in 3-6 months’ time.

A midline incision is made in the abdomen and the involved cancer segment of the colon and the rectum is removed with good margins making sure clear margins are achieved.

Most of my colectomies are performed using minimally invasive techniques.

It is a minimally invasive technique where small incisions are made in the abdomen.  A laparoscope, a telescopic video camera used to see the inside of the abdomen, is inserted through the small incision made earlier. Small special surgical instruments are passed through the other incisions e.g scissors and energy devices which helps to dissect the bowel from its natural attachments to the abdominal wall. The cancer segment of the bowel is then removed.The healthy ends are joined, and all the incisions are closed with sutures.